The City of Burbank, population 103,340 (2010), is located 10 miles north of downtown Los Angeles. Since the 1930s, Burbank has been a major center of motion picture and television production. The southwestern portion of Burbank, known as the Media District, is home to NBC Studios, Warner Bros. and The Walt Disney Studios as well as numerous smaller production companies, post-production facilities and media-related businesses. 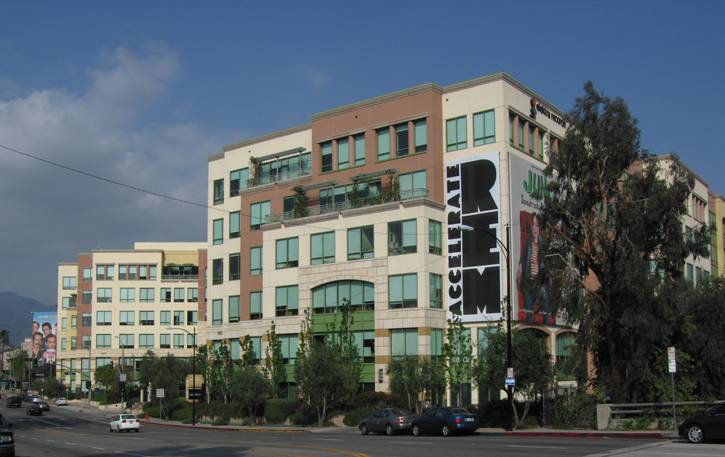 Development on the Media Center South site generated the largest transfer of the Burbank TDR program.

In the mid-1980s, the City of Burbank approved a half-dozen high rise office buildings within the Media District but not on studio property. The residents of the single-family residential areas surrounding the Media District became concerned that further development would create traffic, parking and other problems for their neighborhoods. Conversely, the studios became concerned that the City of Burbank might react to this neighborhood unrest by imposing strict development constraints which could threaten future studio expansion. To resolve these concerns, Burbank adopted a Media District Specific Plan in 1991. The Plan featured a density limitation of 1.1 square feet of office floor area for every one square foot of land area. The studios accepted this density restriction because this floor area ratio ( FAR 1.1 ) still allowed them to meet their growth needs for the foreseeable future.

In an effort to create an equitable plan, the FAR 1.1 density limit was applied uniformly to all commercial/industrial property. But the plan also recognized that this uniform density limit could create a monotonous urban form instead of the concentrations of development needed to define important corridors and nodes. Consequently, the Media District Specific Plan included a provision to allow for flexibility in the location of density through transfer of development rights. The commercial/industrial property owners were generally pleased with this approach because they could place density where it was needed. The residential community also accepted this compromise because the overall development capacity of the Media District would remain constant regardless of the ability to transfer development between sites within the District.

Burbank’s Media District Specific Plan uses a very simple process for transferring development rights. An applicant can apply to transfer any amount of development, using a one-to-one transfer ratio, from any property zoned commercial or industrial in the District to any other property in the District through the conditional use permit (CUP) process. The City Planning Board must hold a noticed public hearing on the CUP and make the six findings normally required in order to approve any CUP. In addition, the Media District Specific Plan requires the Board to determine whether or not the proposed receiving site development would promote the goals of the Plan and whether the scale of the proposed development would be consistent with the Plan’s land use/urban design goals and compatible with surrounding land uses. In addition to considering the receiving site, the Planning Board must find that the proposed transfer would not be detrimental to the sending site; for example, the Planning Board should not approve a transfer which would transfer so much development capacity from a sending site that it would be unusable for an appropriate development in the future. Environmental review on the CUP would be conducted under the California Environmental Quality Act to identify adverse environmental effects which might occur as a result of the transfer; appropriate mitigation measures needed to reduce or eliminate these impacts would be required of the applicant through conditions of approval placed on the CUP.

The development opportunity deducted from the sending site as a result of an approved transfer must be recorded as a deed restriction. When a transfer occurs between two different property owners, the Media District Specific Plan requires the City to charge a transfer fee based on the number of square feet being transferred. The City requires this fee in recognition of the fact that increased density on a receiving site can require additional mitigation. This fee can be used to fund infrastructure or amenities such as public art, street scape treatments, landscaping or other public improvements which are not funded by impact fees.

So far, two projects have been approved using TDR. NBC Plaza, a 715,937 square foot media office complex was approved in 1991 with 310,173 square feet of development transferred from NBC’s main studio campus across the street. The site of NBC Plaza was recognized in the Plan as being the most appropriate site in the entire Media District for a signature, high-rise building; consequently, the City was able to make the finding that the receiving site project promoted the goals of the Media District Specific Plan. Since NBC was a partner in the NBC Plaza project, the transfer did not involve separate property owners and no transfer fees were required. Due to the office market slump of the early 1990s, NBC Plaza was not built. In 1996, the entitlement was amended to allow a 565,000 square foot office complex which used 179,836 square feet of development rights transferred to the site in 1991 following approval of the prior project.

In 1992, Warner Bros. applied to transfer 29,727 square feet from its main studio lot to a 106,839 square foot office building across the street. The receiving site was identified as an important gateway in the Media District Specific Plan. In addition to concentrating density on the receiving site, Warner Bros. added media-related architectural elements including a tower feature with settings for movie murals two stories in height. For both of these reasons, the City found that the proposed project served to implement the urban design goals of the Plan. As with the NBC Plaza project, the sending and receiving sites were in the same ownership and no transfer fees were required. The project was completed in 1994.

The Burbank TDR program has some promising features. The program is very easy to understand and there are very few ways of exceeding the FAR 1.1 density limit without using TDR. However the need to obtain a CUP may discourage some developers and the need to pay a transfer fee could reduce the attractiveness of the program when transfers between different property owners are considered.