Los Angeles County is home to ten million people, making it the most populous county in the United States. Nevertheless, Los Angeles County and its 88 incorporated cities have succeeded in preserving an impressive amount of their natural heritage with the help of the federal and state government.

California poppies color the hills of Paramount Ranch, one of the units in the Santa Monica Mountains National Recreation Area.

The National Forest Service and the U.S. Bureau of Land Management control one million acres of land in Los Angeles County. The Angeles and Los Padres national forests alone protect almost 665,000 acres of land in the San Gabriel and Santa Susana mountains, providing 500 miles of hiking trails, including a segment of the 2,650-mile Pacific Crest Trail. In the Angeles National Forest, the 36,000-acre San Gabriel Wilderness and the 44,000-acre Sheep Mountain Wilderness protect habitat for bear, mountain lion and Nelson bighorn sheep as well as challenging terrain that tops out at over 10,000 feet above sea level. 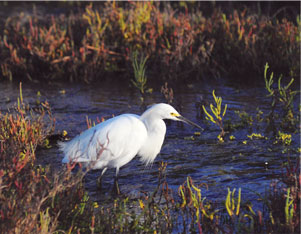 In 1978, the National Park Service partnered with the State of California and local governments to create the Santa Monica Mountains National Recreation Area (SMMNRA), which protects much of the coastal mountain range that extends over 40 miles west from the heart of the City of Los Angeles. The boundaries of this recreation area encompass over 153,000 acres, with over two-thirds of this land area in public ownership, making it the world’s largest urban national park.

The State of California gave an important boost to the expansion of the SMMNRA by establishing the Santa Monica Mountains Conservancy (SMMC) in 1980. Since its inception, the SMMC has helped to protect over 60,000 acres of parkland and contributed to improvements at more than 114 public recreational facilities. Los Angeles County also benefits from the work of three other state conservancies. The San Gabriel and Lower Los Angeles Rivers and Mountains Conservancy was formed in 1999 to serve Eastern Los Angeles and Orange counties and works with local communities to accomplish open space projects such as the expansion of wilderness areas in the foothills of the City of Claremont. The work of the Rivers and Mountains Conservancy is funded primarily by six voter-approved statewide propositions, which generated over $7.7 billion in conservation funding for use throughout California. The Baldwin Hills Conservancy was formed to help create a proposed two-square mile park in southwestern Los Angeles County. The State Coastal Conservancy regulates coastal development and also participates in special coastal projects like the California Coastal Trail, which will ultimately allow adventurous walkers to hike California’s entire 1,200 mile long coastline, including the 81 miles of tide pools and beaches in Los Angeles County.

The State of California maintains a total of more than 59,000 acres at more than 25 parks and beaches in Los Angeles County. In addition, California protects land in preserves like the Antelope Valley California Poppy Reserve, 1,776 acres of desert hills that turn a bright gold when the poppies bloom in spring.

The Los Angeles County park system itself contains more than 65,000 acres of land in over 700 facilities including ten regional parks. In 1992, Los Angeles County voters approved the formation of a regional park and open space district funded by an annual assessment on the more than two million parcels of real property in the County. The 1992 proposition and another proposition approved in 1996 generated almost $859 million in parkland funding.Many of the 88 cities in Los Angeles County have also been preservation leaders in their own right. The City of Los Angeles has 15,000 acres of parkland and natural preserves including Griffith Park, a 4,210-acre oasis three miles north of downtown Los Angeles. The City of Rancho Palos Verdes adopted the County’s first Natural Community Conservation Plan, with a 1,138-acre preserve managed by the Palos Verdes Peninsula Land Conservancy. These efforts helped bring the Palos Verdes Blue Butterfly back from the brink of extinction.

Los Angeles is more popularly known for its car culture than its nature preserves. Nevertheless, thanks to generosity, hard work and cooperation, the County is gradually assembling an impressive network of open space in the land of the freeways.