Orange County, just south of Los Angeles, is famous for its theme parks and classic California coastal communities like Newport Beach and Laguna Beach. But Orange County has also witnessed numerous victories for open space preservation and restoration, like the Bolsa Chica wetlands. These productive, tidal wetlands were cut off from the Pacific Ocean in 1900 by a hunting club. Throughout the 20th Century, cattle grazing, military installations, oil facilities and other inappropriate uses took their toll. In 1973, the State of California protected a portion of the original wetlands but the remainder was slated to become a commercial-residential marina. Conservation organizations went to court and succeeded in reducing the scale of the original development proposal. Then the State bought additional land, increasing public ownership to 1,200 acres. Wetland restoration culminated in 2006, when the connection to the Pacific was reestablished and salt water once again flowed in and out. Today, Bolsa Chica has regained its status as a critical stop for migratory birds on the Pacific Flyway and has become a popular destination for birders and school field trips as well. But Bolsa Chica is just one of Orange County’s many open space success stories.

The Bolsa Chica wetlands were not only preserved but also restored after a century of inappropriate uses and damaging alterations.

Orange County manages 15 regional parks and six wilderness parks with an impressive total of more than 30,000 acres. The largest of these is 8,000-acre Caspers Wilderness Park. Laguna Coast Wilderness Park, 6,500 acres in size, protects many of the last remnants of Southern California’s coastal canyons and safeguards important examples of disappearing ecosystems. In addition to regional and wilderness parks, Orange County maintains four beaches and the Upper Newport Bay Nature Preserve and Ecological Reserve. 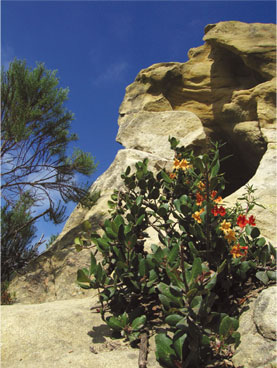 The South Coast Wilderness Area coordinates several individual holdings including the Laguna Coast Wilderness Park as well as Crystal Cove State Park, the City of Irvine Open Space and the Irvine Ranch Wildlands and Parks. Crystal Cove, which was born in the 1920s as a tiny coastal community, was placed on the National Register of Historic Places in 1979. The State of California is currently restoring the Crystal Cove historic district and has surrounded it with a 2,400-acre state park that features 18 miles of trails through coastal hillsides and opportunities to explore tide pools and beaches along 3.2 miles of shoreline. A 1,140-acre underwater park lies offshore for snorkelers and scuba divers. The waters of Crystal Cove are also one of several sites where the Kelp Restoration Project is repairing the kelp forest that provides critical habitat for many threatened aquatic species.

Through cooperation between multiple governmental agencies, private landowners and dedicated environmentalists, Orange County has succeeded in protecting a wide assortment of natural communities despite its highly desirable location for development. As shown by the Bolsa Chica wetlands and other restoration projects, Orange County is also demonstrating its commitment to healing as well as saving its natural heritage.