The Town of Hatfield, population 3,500, is located on the Connecticut River, five miles west of Amherst in Western Massachusetts. In the 1660s, English colonists settled this area, attracted by the flat, fertile land. At one point, Hatfield specialized in the production of broom corn and the manufacture of brooms. Later, the cash crop shifted to tobacco and other produce. Today, agriculture employs few residents, who mainly commute to jobs in other communities. Nevertheless, Hatfield wants to retain its small town character and its agricultural heritage. 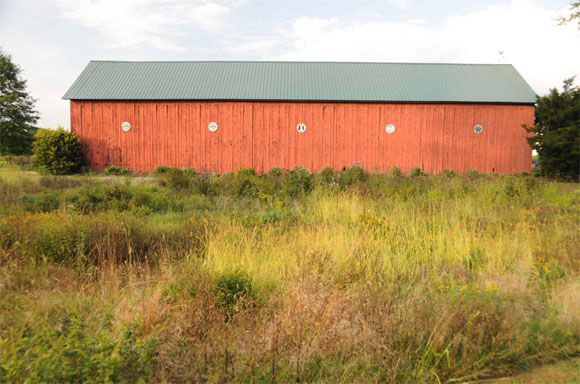 The sending areas consist of all land in the Agricultural, Outlying Residential and Rural Residential zones. Unlike most TDR ordinances, the Hatfield ordinance contains specific procedures for releasing an easement recorded in compliance with the TDR ordinance. When the easement is an Agricultural Preservation restriction, the following two requirements apply.

The receiving areas consist of all land served by Town water and sewer within the Business, Industrial and Light Industrial zones. Developers apply for a Special Permit with a plan showing the proposed receiving site development with the bonus intensity. If the receiving site is in the Business zone, each development right allows an additional 2,000 sf of floor area above the baseline limit plus an extra five percent increase in lot coverage. Even with TDR, lot coverage cannot exceed 75 percent.

Two different bonus formulas are in effect in the Industrial and Light Industrial zones depending on the size of the building site. 1) When the site is less than 30,000 sf, each development right allows an extra two percent increase in allowable building coverage. 2) When the site is 30,000 sf or larger, each development right allows an extra 5,000 sf of floor area but maximum lot coverage cannot exceed 50 percent even with TDR.

Unlike most TDR programs, the Hatfield program does not give developers the option of purchasing TDRs themselves. Instead, when the number of TDRs needed for approval of a receiving site project is calculated, the developer must pay a cash contribution in lieu of TDRs to the Town’s Land Preservation Fund to be used by the Hatfield Agricultural Advisory Committee to buy easements in the sending area. Under a Hatfield formula, the average per acre value of a Development Right is the difference between the average per acre assessed value of residentially improved land and the average assessed value of unimproved land according to the most recent Town-wide comprehensive property value assessment. The cash contribution in lieu of each required TDR must be one and one half times the average per acre cost of a development right as determined by the above formula.