Los Angeles, California, population 3,979,576 (2019), lies at the heart of a six-county region with a population of over 18.5 million. The city has been building a high-density, mixed-use downtown-based largely on a plan for the Central Business District (CBD) approved in 1975. The CBD Plan has been implemented in part by three TDR mechanisms designed to achieve a wide range of objectives: preserve historic landmarks, promote affordable housing, create public open space, provide public transportation and create public/cultural facilities as well as offer flexibility in the concentration of development without overwhelming the overall capacity of the public service and infrastructure system. 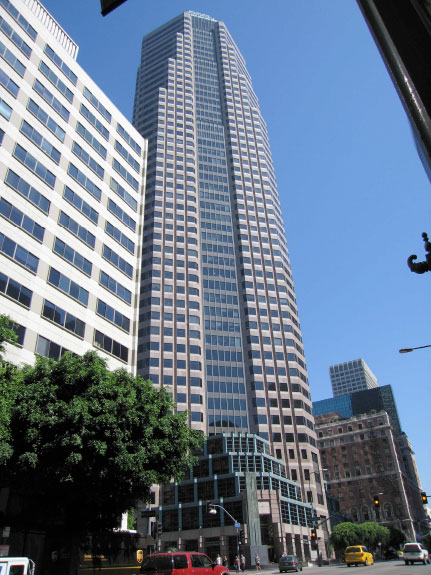 As discussed at the end of this profile, as of April 2021, the city was headed toward adoption of a Downtown Community Plan in 2021 that would incorporate a historic preservation TDR component within a community benefits program aimed at prioritizing affordable housing within a multi-level system allowing additional development potential above baseline.

The original CBD Plan allowed unused floor area potential to be transferred within the CBD as long as the donor (sending) and receiving sites were within 1,500 feet of one another and located within four sub-districts. In 1985, the City adopted a variation of the original mechanism called the Designated Building Site ordinance as a way of preserving historic downtown buildings in general and the City’s Central Library in particular. When the City adopted a third permutation in 1988, the original 1975 provisions continued to apply to transfers of 50,000 square feet of floor area or less while transfers greater than 50,000 square feet were regulated by the new program, known as Transfer of Floor Area Rights, or TFAR. For many years, TFAR required developers to make a Public Benefit Payment to the City of $35 per square foot of transferred floor area to be used for affordable housing, open space, historic preservation, public transportation, and public/cultural facilities. The amount required under the Public Benefits Payment has changed but it is still a highly effective means of generating funding for downtown betterment, as explained below.

TFAR: Transferable Floor Area Rights – In the TFAR program, sending sites and receiving sites can be any parcels within the CBD. The baseline density allowed to parcels in the project area is either floor area ratio (FAR) 3:1 or 6:1 depending on the subarea in which the site is located. Property owners who do not wish to build up to these baseline densities can sell their unused floor area potential. Conversely, developers who want to exceed these baselines can buy transferable floor area rights, or TFARs, and achieve a maximum FAR 13:1. Developers wanting to exceed baseline can avoid the TFAR requirements only under limited exceptions such as the replacement of an existing building or the development of properties that qualify for a variance due to exceptional circumstances.

Applications for TFAR must meet all of six conditions including plan consistency, appropriateness within the circulation system, and compatibility with existing/proposed development as well as the infrastructure system.

Developers are required to pay a Public Benefit Payment on transfers in order to fund public open space, affordable housing, cultural/public facilities, historic preservation, and public transportation improvements. Compliance with this requirement can be deferred until the project begins construction. The original flat fee of $35 per transferred square foot of floor area has since been replaced by the following formula: 1) take the sales price or appraised value of the receiving site; 2) divide by the receiving site area; 3) divide again by the site’s baseline density limit; 4) multiply by 40 percent, and 5) multiply again by the number of square feet to be transferred to the site. (To illustrate with an actual example, a Public Benefit Payment of $5,273,329 was calculated for the proposed transfer of 242,276 square feet of floor area to a receiving site 34,675.17 square feet in size appraised at $11.3 million within a zoning district with a FAR 6.0 baseline.)

As mentioned above, the Designated Building Site process was created for the Los Angeles Central Library, a beloved landmark built in 1926 and listed in the National Register of Historic Places. In 1985, the Community Redevelopment Agency and a developer jointly applied for Designated Building Site status for five properties in downtown Los Angeles, including the Central Library, with a combined land area of 382,422 square feet. Under the baseline zoning limits, the by-right development on these five parcels would have been limited to a total of 2.5 million square feet of floor area. However, through the Designated Building Site process, a total of more than 3 million square feet of floor area was built including three nearby office buildings, a public plaza and the restoration and expansion of the Central Library itself. It is estimated that, in return for the increased density, the City received an estimated $65-million worth of public benefits from this approval.

As discussed above, the 1988 amendments added a $35 per square foot Public Benefits Payment requirement to larger transfers. Nevertheless, the building boom of the late 1980s resulted in the continued use of TFAR. Following the 1988 code changes, three additional projects were approved with a total build-out of 3.5 million square feet of office, hotel, and retail floor area including one million square feet of transferred floor area. The dismantling of the CRA in 2012 has made it even more difficult than ever to obtain estimates of the transfers and community benefits generated by the TFAR program. However, a study prepared by the New York City Department of City Planning reports that Los Angeles TDR programs have transferred 6.6 million square feet of floor area, resulting in an estimated total of $90 million in community benefits. The New York report also states that the Los Angeles Convention Center has been the largest supplier of TDRs (NYC 2015).

The draft Downtown Community Plan proposes baseline/maximum FARs for nine downtown subareas and baseline/maximum building stories for five downtown subareas. The draft Community Benefits Program explains that the affordable housing benefit could be satisfied onsite, by payment to an affordable housing trust fund, or by participating in affordable housing that is off-site but within the Downtown Plan Area. In Level Two, the draft allows one FAR of bonus FAR for each 4 percent of lot area that qualifies as public open space. Also in Level Two, one FAR of bonus FAR is proposed to be allowed for each 2.5 percent of floor area plus 5,000 square feet developed as community facility space. For the historic TDR mechanism, donor sites must be designated at the local, state or federal level or identified in SurveyLA as an individual resource or contributing building to a historic district. Donor historic sites are subject to a preservation contract documenting maintenance, rehabilitation, and inspection requirements plus a covenant acknowledging the reduced floor area.

In addition to the proposed Community Benefits Program, the Fall 2020 draft Downtown Community Plan recommends exploration of a TDR program allowing the transfer of development rights from dedicated public park space in downtown.