The City of Milton, population 33,000, was formed in 2006 by the incorporation of the north end of Fulton County, 25 miles north of downtown Atlanta. This 38 square mile city is largely semi-rural and still has small farms and equestrian facilities. In 2012 and 2013, the City adopted two form-based codes that incorporated transferable development rights components designed to encourage the voluntary preservation of environmental areas, rural character, parks, greenways and trails throughout the city including the implementation of plans for mapped greenspace features within two receiving areas: Crabapple and Deerfield. 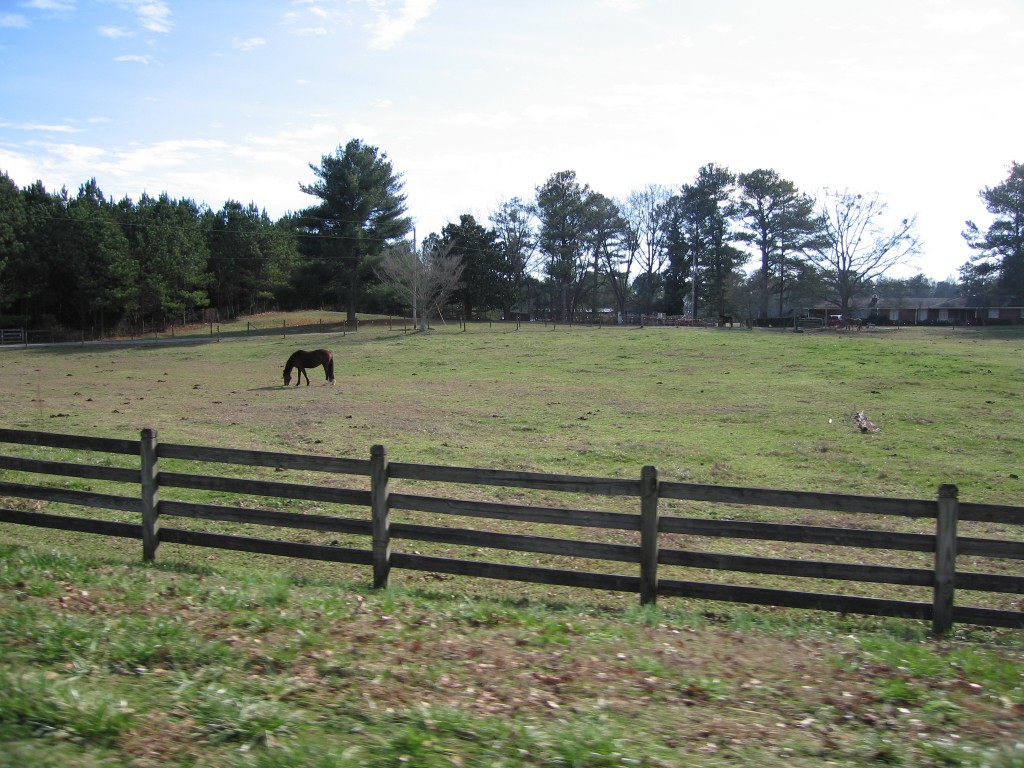 Milton uses TDR to encourage the dedication of parks and greenways as well as preserve farmland, rural character and equestrian properties.

In June 2012, Milton adopted a form-based code (FBC) for Crabapple, a village-scale community with some historic features that already was home to both multi-family and single-family development as well as some office and retail space. The Crabapple FBC promotes a walkable environment with its own greenspace and trail connections linking residents with schools, parks and other destinations. The FBC allows eligible sending site landowners to voluntarily participate by offering their property either as open space or parks/greenways.

In order to be issued TDRs, the owners of Open Space TDR Sending Sites record a permanent conservation easement, approved by the Community Development Director, that limits future development of the sending site to a density of no more than one dwelling per parcel or one dwelling per full 25 acres, whichever is greater. The easement specifies that all other uses, building requirements and activities are controlled by the provisions of the T2 zone for parcels within Crabapple and the provisions of the AG-1 zoning district for parcels in other parts of the city. While the owners of Open Space TDR Sending Sites retain fee ownership, the owners of Park/Greenway TDR Sending Sites are issued TDRs in return for transferring title to the city. However, the code allows a permanent public access easement to be used instead of title transfer if the proposed easement would implement all preservation and public recreational goals for the site.

Sending site owners who transfer title for sites designated as Park/Greenway and Civic Space receive TDRs at a higher factor than the owners of Open Space sites because they are relinquishing title and, in the case of Civic Space sites, are granting title to property that has a high priority as a potential community asset. After deducting all acreage precluded from development by prior restrictions, the owners of Open Space TDR Sending Sites are issued transferable development rights (TDRs) using the following formula:

Constrained land includes the area occupied by lakes, streams, wetlands, buffers, landfills and all other land approved by the city.

The Crabapple FBC maps four zones within its sub-city planning area. The T2 zone is rural and serves as a potential sending zone for interested property owners. The other three zones include density baselines that developers may achieve without TDR and maximum densities that can only be reached by TDR:

The Crabapple FBC uses a 2:1 transfer ratio meaning that two bonus building units are granted per one TDR. Each building unit in the Crabapple FBC is one dwelling unit or 2,250 square feet of non-residential floor area. For example, on a one-acre site in the T-4 zone, a developer could build 5 units without buying TDRs or build to the code maximum density of 9 units by buying two TDRs. Two TDRs would also allow 4,500 square feet of bonus non-residential floor area.

In 2013, Milton adopted its Deerfield FBC which incorporates the city’s second TDR receiving area. Deerfield is a partly-developed multi-use area with access to Georgia 400/US 19, a major expressway route into downtown Atlanta. This FBC promotes Deerfield as Milton’s premier mixed use area featuring greenspace, trails and pedestrian-friendly development. The TDR components are almost identical to those found in the Crabapple FBC. For example, the receiving sites in Deerfield can accomplish the preservation of open space, parks/greenways and civic space throughout the city as well as within the Deerfield planning area. However, one TDR allows four rather than two bonus building units in Deerfield. For example, in the T4 Zone, a one-acre receiving site would need only one TDR to exceed the baseline density of 5 units per acre and achieve the maximum density allowed in this zone of 9 units per acre. And because the area is more urban in nature than Crabapple, Deerfield has an additional higher-density zone that acts as TDR receiving zone: T-6 with a baseline of 12 building units per acre and a maximum with-TDR density of 36 building units per acre.