New York City, New York, population 8,419,000 (2019), was the first US city to use TDR and currently maintains two citywide transfer programs plus transfer mechanisms in ten special districts. Developers in New York City paid more than $1 billion for TDRs between 2003 and 2011. Despite a slump during the Great Recession, at least 421 development rights transactions occurred in New York during this nine-year period (Furman, 2013). 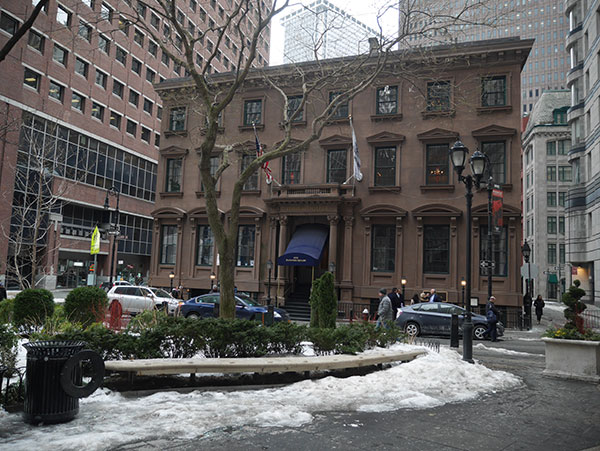 India House was preserved by a Landmark Program (Section 74-79) transfer of 123,857 square feet to a receiving site at 7 Hanover Square.

Historical Context – The historic landmarks TDR mechanism was adopted as part of the city’s 1968 Landmarks Preservation Law. It allowed, and still allows, unused density to be transferred from landmark buildings to adjacent sites in order to protect historic buildings from inappropriate alterations or demolition yet provide a form of compensation to the landmark owner for these restrictions. The city Landmarks Commission designated Grand Central Station as a landmark and denied the owner, Penn Central Transportation Company, permission to build an office tower on top of this building. The ensuing Penn Central lawsuit was ultimately decided in 1978 by the U.S. Supreme Court in favor of the city. The court found that the city’s denial was not a regulatory taking under the Fifth Amendment of the US Constitution prohibiting governments from taking private property for public use without ‘just compensation.’ In its 1922 Pennsylvania Coal Co. v Mahon decision, the court found that a regulation can be taking if it goes too far. But in Penn Central, the court did not conclude that a regulatory taking had occurred. Plus, the decision added: “…while these [development] rights may well not have constituted ‘just compensation’ if a taking had occurred, the rights nevertheless undoubtedly mitigate whatever financial burdens the law has imposed on the appellants and, for that reason, are to be taken into account in considering the impact of regulation.” The US Supreme Court has yet to decide the question of whether or not TDRs constitute ‘just compensation’ in the event of an actual taking. However, the court’s recognition of TDR as a legitimate mitigation measure gave communities throughout the US the confidence to adopt TDR programs. 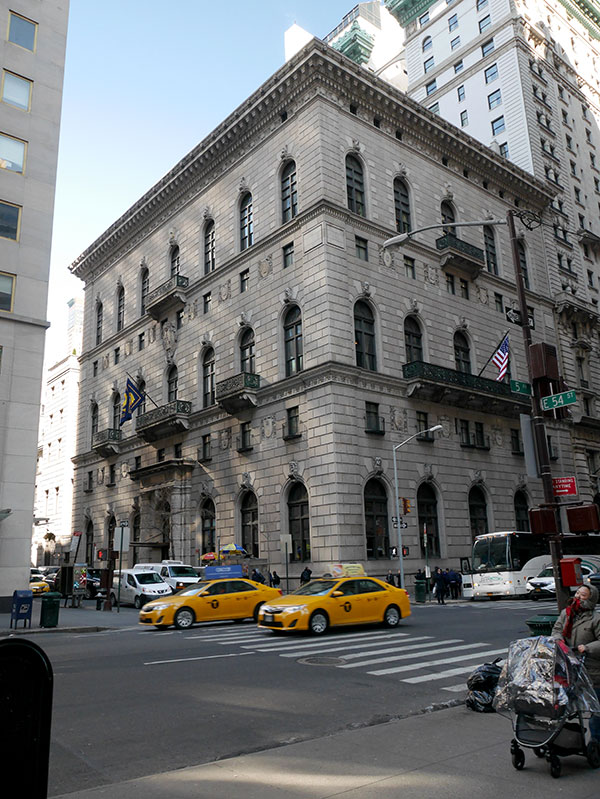 The University Club was preserved by a 2009 transfer under Section 74-79.

Zoning Lot Merger (ZLM) – ZLMs treat contiguous tax lots as a single lot for zoning purposes, allowing the unused floor area from one tax lot to be freely used on another contiguous tax lot. The tax lots do not have to be under common ownership or lease. The mergers occur as a matter of right and require no approvals other than the recording of a Zoning Lot Development Agreement, known as a ZLDA or “Zelda”. 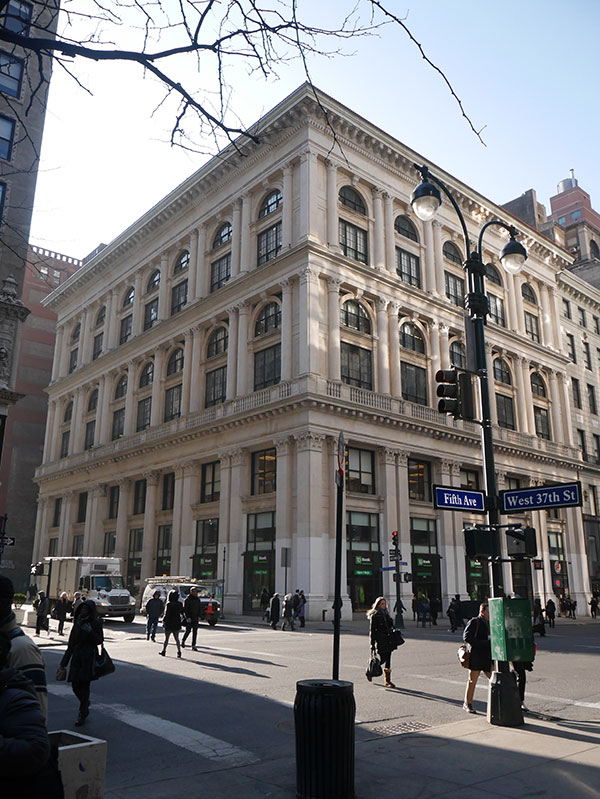 The Tiffany Building was preserved by a Section 74-79 transfer of 173,692 square feet of unused floor area.

ZLMs are not required to implement any particular planning goals. The Department of City Planning refers to ZLMs as “not technically TDRs” but feels obligated to treat them like TDRs since ZLMs operate in the same markets and produce results similar to TDR. A 2015 report from the Department entitled A Survey of Transferable Development Rights Mechanisms in New York City takes the position that it is problematic to place additional restrictions on ZLMs. “Tax lot lines reflect historic ownership patterns but typically do not relate to any land use purposes. Restrictions on the ability to merge them into unified zoning lots would give land use effect to tax lot lines, often without obvious underlying land use rationale. That may present legal and administrative difficulties” (NYC, 2015). 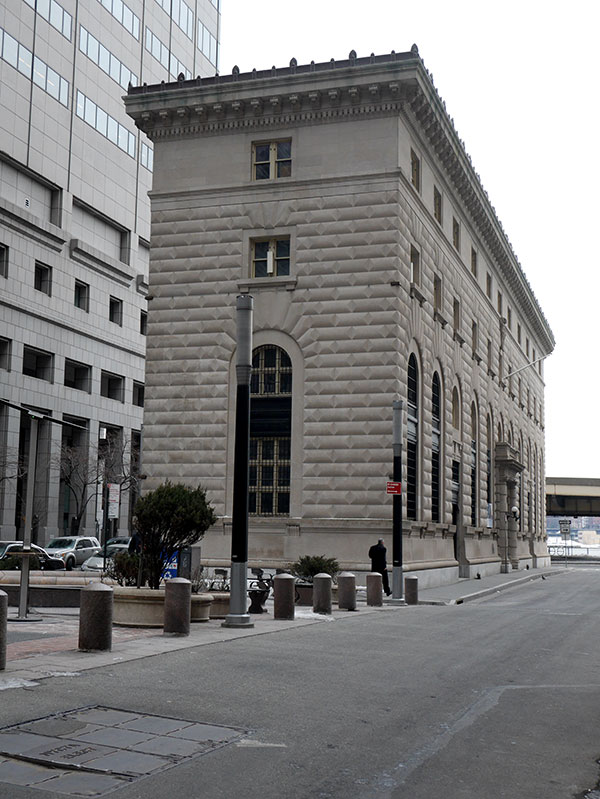 Although ZLMs are not required to implement planning goals, they sometimes do. Of the 421 transactions occurring between 2003 and 2011, 21 involved transfers from landmarks with 19 transfers resulting from ZLMs versus two under the Landmarks Program (Furman, 2013).

The original 1916 ZLM process allowed the construction of the Empire State Building in 1931. Changes were made to ZLM provisions in 1961, 1977, and 2001 after the Trump World Tower created controversy by concentrating development on 13 percent of a large merged zoning lot. Today, ZLMs have facilitated several extremely tall towers in parts of Midtown that are not within contextual districts and consequently have no height limits. These ultra-high towers have drawn complaints from community organizations and the Municipal Arts Society, which published a critical report entitled “The Accidental Skyline” (NYC 2015). 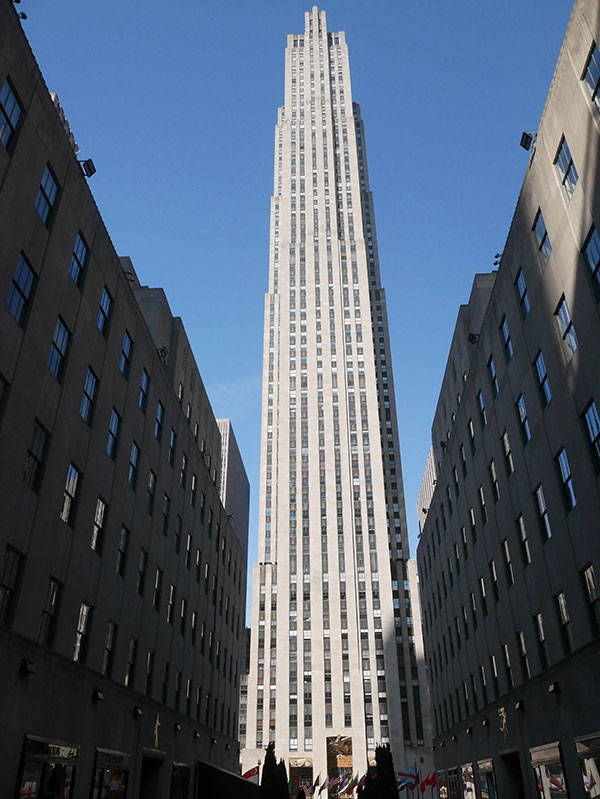 A transfer between parts of Rockefeller Center was approved under the Landmarks program but not built.

Landmarks TDR Program: 74-79 – The Landmarks TDR program is often referred to as “74-79” for its section in the city Zoning Resolution. The 74-79 mechanism allows the difference between the floor area of a landmark and the floor area that would be allowed by zoning (if it were not a landmark) to be transferred to adjacent zoning lots. In 74-79, ‘adjacency’ means not just abutting lots but lots that are across streets and intersections and connected via chains of lots under common ownership. Despite this generous definition of adjacency, the Landmarks TDR program generated transfers from only 12 landmarks between 1968 and 2013including Grand Central Terminal, Amster Yard, India House, John Street Methodist Church, Old Slip Police Station, 55 Wall Street, Rockefeller Center, Tiffany Building, Seagram Building, University Club, and St. Thomas Church for a total transfer of 1,994,137 square feet. An additional transfer between parts of Rockefeller Center was approved but not built (NYC 2015). 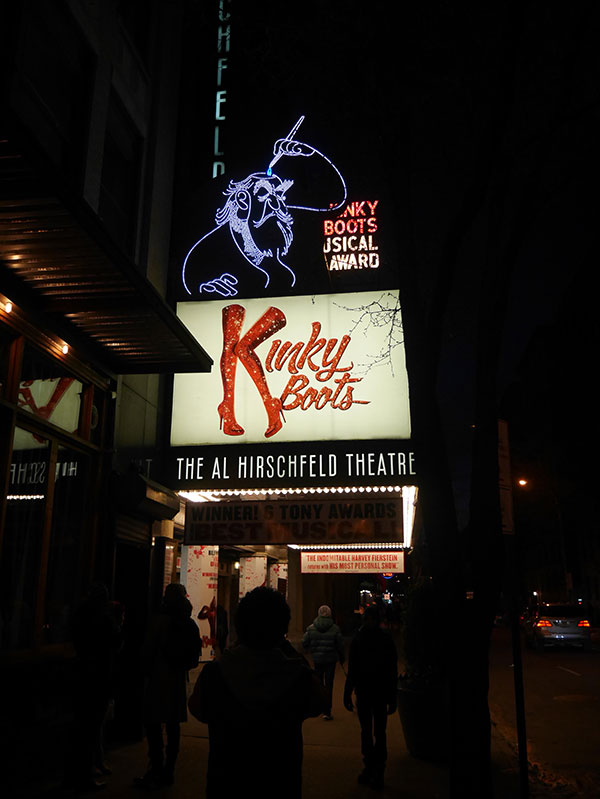 The Theater District mechanism has transferred floor area from six theaters including the Hirschfield.

Observers cite the following reasons for reluctance to use 74-79. 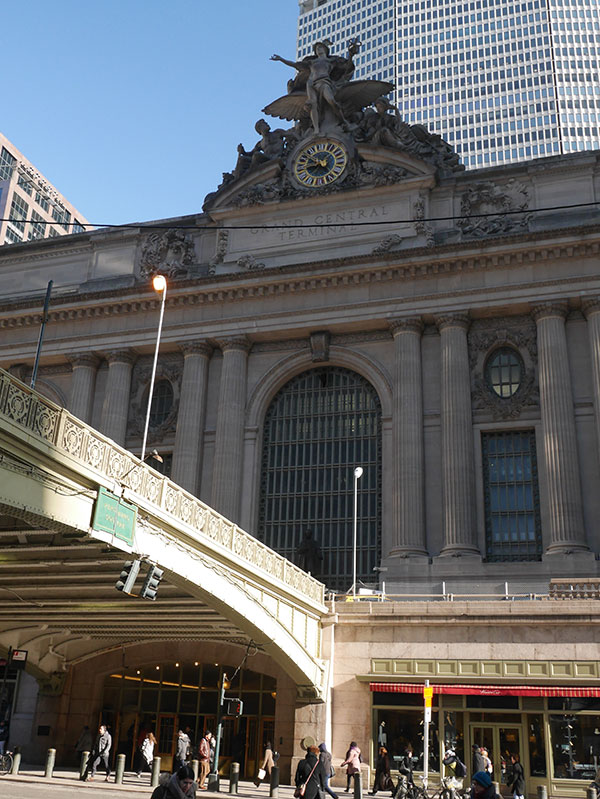 The 1968 Landmarks TDR program and subsequent programs have transferred almost 40 percent of the unused floor area from Grand Central Terminal.

Consequently, developers prefer whenever possible to use the ZLM process which is ministerial and therefore faster, cheaper, and more certain. The numbers reflect this preference: between 2003 and 2011, 74-79 was used twice compared with 385 transfers occurring under the ZLM process (Furman 2013; Furman 2014; Gilmore 2013).

In its 2014 report, Unlocking the Right to Build: Designing a More Flexible System for Transferring Development Rights, the Furman Center argued for a retooling of the ZR 74-79 landmarks TDR program so that sending site owners to have more potential users for their unused development rights. The report concludes that many benefits could result from this zoning code rewrite since the City had 1,400 designated landmarks as of 2014. In the portion of Manhattan south of Central Park alone, the report estimates that landmarks held 33 million square feet of unused development rights, enough transferable floor area to accommodate 33,000 additional residential units in receiving sites. Using TDR to create more housing units would relieve housing shortages and restrain rising housing costs that are forcing 47 percent of low-income renters to spend more than half of their income on rent and utilities (Furman 2014). 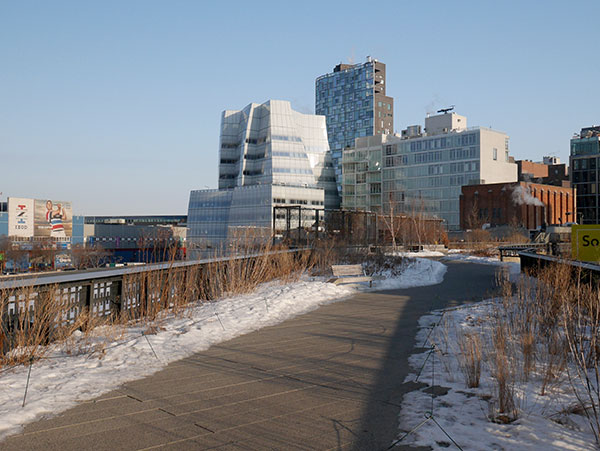 The IAC Building, designed by Frank Gehry, as viewed from the High Line, the elevated linear park facilitated by the TDR mechanism in the Special West Chelsea District.

Theater District – In 1967, the city adopted a Special Theater District which used development bonuses that motivated the construction of five new theaters. However, the Theater District provisions were less successful at saving existing theaters. After losing several theaters, the city adopted a special permit process in 1982 that made it easier to transfer unused development potential from listed theaters and added a bonus for theater rehabilitation. However, the program was constrained by a limited receiving area. By 1988, the Theater Advisory Committee had grown the number of listed theaters to 30. To increase transfer options, the city allowed receiving sites in the Theater District outside the core to add one FAR of bulk in return for making a payment to preserve a theater within the core. This incentive proved inadequate. Between 1982 and 1998, only four transfers occurred yet theater owners had an inventory of over two million square feet of unused development potential (NYC 2015).

In 1998, the city adopted several reforms to its Theater District program.

To qualify for these bonuses, theater owners must covenant to maintain the theater for legitimate theater uses for the life of the receiving site development. TDRs prices are determined by private transactions and in 2015 averaged about $225 per transferred square foot. Between 2001 and 2015, the Theater District became the city’s most active TDR program, transferring roughly 500,000 square feet in 15 transfers from nine theaters (NYC 2015).

Special West Chelsea District – New York wanted to convert an abandoned elevated railway into the High Line pedestrian open space now beloved by residents and tourists. In 2005, New York adopted the Special West Chelsea District which allowed owners of properties constrained by the High Line to transfer their unusable development rights to receiving areas in most of the district’s nine subdistricts. Importantly, the receiving sub-districts were not adjacent to the High Line due to the desire to create light, air, and views from the High Line. Transfers are allowed by notification, a process that is easier than certification and considered the least onerous mechanism of any TDR transfer process allowed in New York City. The prices for these TDRs have ranged from $200 to $400 per square foot. The receiving site bonuses are in tiers that require a certain number of TDRs to be used before other bonuses can be added in order to achieve maximum development potential. For the non-TDR tiers, a density bonus is granted for affordable housing and restoration of the High Line itself.  As of 2015, 403,983 square feet of development had been transferred from 25 sending sites (NYC 2015). 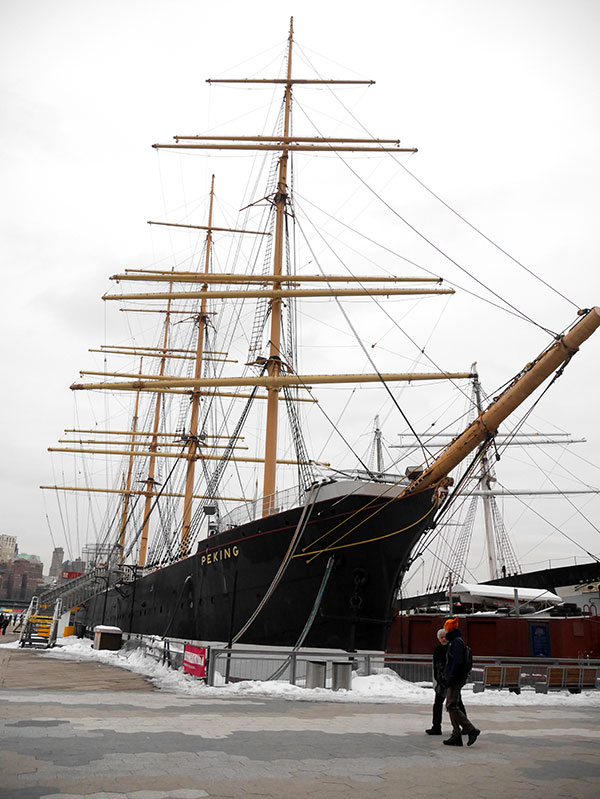 The South Street Seaport is a popular destination on the partly-completed East River Esplanade.

South Street Seaport – The city created the South Street Seaport Subdistrict in 1972 to support the South Street Seaport Museum plus preserve and restore the historic Schermerhorn Row landmark buildings which were defaulting on mortgages and at risk of demolition. A TDR bank was created to immediately save the buildings and hold the TDRs for later use on designated South Street commercial area receiving site developments. Chase Manhattan Bank and Citibank accepted the TDRs as partial satisfaction of loan obligations. In contrast with most traditional historic preservation TDR programs, the allocation formula is the floor area of the sending site-building or five times the lot area including the land area of adjacent abandoned streets. Transfers were conducted by the relatively easy process of certification. By 2013, all but 340,000 square feet out of a total supply of 1.4 million square feet had been transferred to six receiving site projects at prices ranging from $110 to $150 per square foot in 2007-2008 (NYC 2015).

Hudson Yards Special District – In 2005, the city adopted a special district that included two TDR mechanisms to help create an open space network without the expense of condemnation or acquisition as part of the redevelopment of the Metropolitan Transportation Authority’s rail terminal facilities known as Hudson Yards. Like the West Chelsea Special District, maximum density in some of the receiving areas can only be achieved by combining TDRs with other bonus options. MTA owns the development rights and established the TDR price at 65 percent of the receiving site’s appraised development rights, which in 2015 was about $350 per square foot. As of 2015, the transfer of 566,628 square feet of TDRs was pending (NYC 2015).

Special Manhattanville Mixed Use District – This district, adopted in 2007, allows Columbia University to move density between sending and receiving sites owned by the University in order to create open space in a new campus while retaining its full development potential (NYC 2015).

Sheepshead Bay Special District – This TDR program was created in 1973 to promote preservation of a revered restaurant by allowing transfers within a 20-block district. The program allowed a TDR bank to facilitate transfers but the restaurant closed and the district had not experienced any transfers by 2015 (NYC 2015).

United Nations Special District – In 1970, the city adopted a special district that included a mechanism to move bulk around within the area surrounding the United Nations complex (NYC 2015).

Hudson River Park Special Transfer District – In 2015, the city approved a mechanism to rehabilitate Pier 40 in Hudson River Park by severing and selling TDRs to a large mixed-use development with senior and affordable housing on the other side of the West Side Highway (NYC 2015).

Gilmore, Kate. 2013. A Process Evaluation of New York City’s Zoning Resolution (ZR) 74-79: Why Is It Being Used So Infrequently? New York: Columbia University.