Newport Beach, population 85,000, is an affluent city on the Pacific Coast in Orange County, California, roughly 50 miles southeast of downtown Los Angeles. Newport Beach shares a border with the City of Irvine, which has had a TDR program in effect for decades. The city now has a TDR program of its own aimed at incentivizing developers to provide various community benefits including reducing vehicle trips, improving development scale and character, preserving historic and natural resources and contributing open space, parking, public view corridors and other amenities. The transfer provisions apply within all zoning districts. 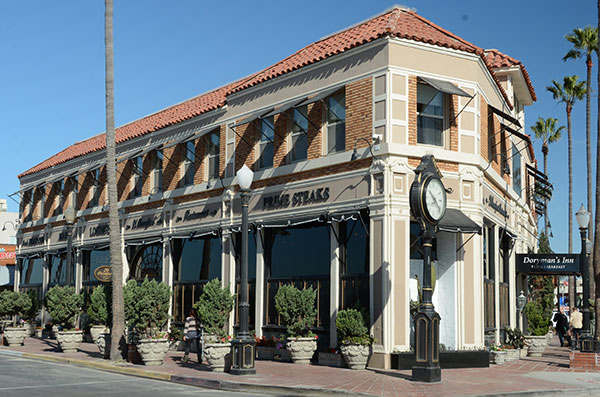 Historic structures, like the 1926 Doryman’s Inn, qualify as sending sites under Newport Beach’s TDR program along with transfers that provide several other types of community benefits.

To approve a TDR application, the City Council must find that the proposed transfer would produce one or more of the benefits listed above. The zoning code Chapter 20.58 lists four additional requirements in Section 20.58.030.

A) The donor and receiver sites must be located within the same Statistical Area as found in the Land Use Element of the General Plan.

C) “The maximum gross floor area allowed on a donor site shall be reduced by the amount of the transfer of development intensity to the receiver site.”

D) Transfers of residential development rights must be on a unit for unit basis.

B) PM peak hour trip generation with and without the proposed transfer must be analyzed by a traffic engineer.

C) Where necessary, additional traffic analysis must determine whether the proposed transfer would worsen congestion at any primary intersection already experiencing unsatisfactory levels of service.

D) When the transfer involves conversions of development potential, the applicant must calculate the floor area with and without the transfer.

E) In addition to finding that the proposed transfer produces one of the community benefits listed above, the City Council must make three addition findings.

The transfer provisions have been used on a number of occasions.