The City of San Diego, population 1,301,617 (2010), considered TDR in the late 1970s for a wide range of uses including the preservation of open space, agricultural land and historic structures. At that time, the use of TDR City-wide was discarded as being logistically burdensome and expensive. Nevertheless, in 1981, San Diego adopted a TDR program to preserve historic structures in the Golden Hill Planned District, which is immediately southeast of downtown San Diego. The projects proposed under this ordinance were often opposed by residents surrounding the receiving areas as being overly dense. Consequently, only a few TDR projects were approved in the 1980s. When the Golden Hill Planned District was updated in 1989, the TDR component was eliminated from the ordinance. A description of the Golden Hill TDR program is included at the bottom of this profile following a description of two TDR mechanisms currently in use within downtown San Diego. 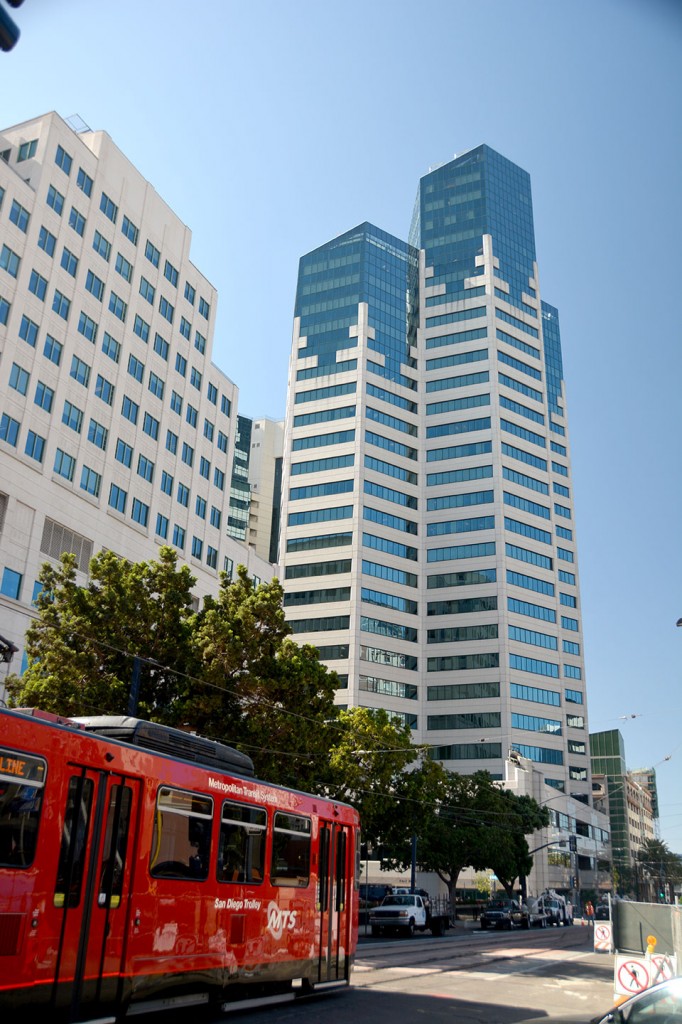 In downtown San Diego, revenue from an FAR Payment Bonus Program is used to create parks and other public improvements.

Civic San Diego is a non-profit organization owned by the City of San Diego tasked with promoting economic development in 13 neighborhoods including downtown San Diego. It was formed in 2012 in response to the State of California’s dissolution of traditional redevelopment agencies. The downtown development regulations contain provisions for traditional TDR and also allow Bonus FAR Purchases which generate money for off-site public improvements, a technique that is essentially a form of TDR that SmartPreservation.net refers to as density transfer charge or DTC.

Traditional TDR Program – The TDR provisions (156.0309g) are designed to create additional downtown parkland and preserve/restore designated historic landmarks. The eligible park sites are identified in the downtown community plan. To qualify as a historic resource sending site, the sending site must contain designated historical resources and be located on the same block as the receiving site or be the subject of a study, approved by the Civic San Diego President, verifying that a transfer of floor area is needed to finance rehabilitation and preservation of the landmark.

“The amount of gross floor area approved for transfer shall be determined based on the permitted transferable gross floor area, the extent of the rehabilitation and preservation costs needed for the historical resource, and the potential for appropriate future development on the sending site to achieve the goals and policies of the Downtown Community Plan and this Section.”

To use the program, TDR sending site owners must enter into a Preservation, Restoration and Maintenance Agreement that commits the owner to rehabilitate the structure and reconstruct it in the event that it is destroyed. Transfers are documented by recorded certificates of transfer. The owners of park sending sites execute a deed transferring ownership of park sites to the City.

The Civic San Diego President approves transfers directly from sending to receiving sites. The code also allows the City to acquire, bank and hold transferred floor area prior to transfer to a receiving site. If a transfer is proposed to a TDR bank, the City Manager must approve the transfer.

According to Brad Richter, Assistant Vice President – Planning for Civic San Diego, no developments have taken advantage of this traditional TDR mechanism as of October 2014.

Downtown DTC Program – Section 156.0309(e) allows developments to exceed maximum base FAR when applicants offer any of the following specified public benefits: affordable housing, open space, three-bedroom dwelling units, eco roofs, public parking, green building features and uses that generate employment. Presumably these public benefits occur at the development site, making these provisions a form of bonus density rather than TDR (which involves the creation of public benefit at a place (the sending site) that is different from the place gaining the additional density (the receiving site).

However, in addition to the options listed above, developers can also exceed maximum base FAR and achieve up to 2.0 bonus FAR by using a FAR Payment Bonus Program. The maximum FAR achievable using the FAR Payment Bonus Program is limited by the code’s Figure J. Applicants can also use other bonus options, like those mentioned in the paragraph above, to reach maximum density limits specified in the code. The Downtown Plan calls for the revenues to be used to promote public parks and public infrastructure in the downtown, presumably at sites other than those gaining density as a result of the FAR Payment Bonus Program, making this program a form of TDR known as density transfer charge (DTC).

The FAR Bonus Payment was set at $15 per square foot of bonus floor area when the tool was first implemented in 2007 and is adjusted on July 1 each year to keep pace with inflation based on changes in the consumer price index for urban San Diego County. The payment calculation is made when the application for a development seeking bonus FAR is deemed complete but the payment is not required to be paid until the applicant seeks to pull a building permit for the receiving site project.

According to a study by the Greenbelt Alliance, the FAR Payment Bonus Program succeeded in raising $1.7 million by 2012 and is being applied toward the construction of a new downtown park (Schildt, 2012).

San Diego’s Golden Hill Planned District is a 2,200-acre area with more than 50 blocks extending from Balboa Park to Highway 94 from 19th to 28th Street. The Planned District was created in 1981 to revitalize this declining neighborhood while preserving historically—and architecturally-significant structures. The Planned District Ordinance grants density bonuses to projects which implement the City’s objectives for this area including environmental protection, affordable housing, specific design features and energy-conservation techniques.

In addition, the 1981 ordinance included a transfer of development rights option designed to preserve significant historical/architectural structures. This provision allowed the owners to transfer their unused development rights rather than demolish these buildings in order to achieve the maximum density allowed by the code.

Three types of historic properties were eligible as sending sites: a property designated as a historical site by the Historical Site Board; a contributing structure within the Historic District; or a structure designated historically/architecturally significant in a survey approved by the Historic Site Board. In addition to the designation requirement, to qualify for TDR, the property owner had to grant a facade easement, in perpetuity, to the City of San Diego.

Under the 1981 ordinance, a purchaser of development rights had to register all development rights transfers with the City Planning Department. The receiving sites were properties located within five subareas of the Planned District. With transferred rights, a project could exceed the base density allowed by the code by 25 percent. If a receiving site project also proposed to use the density bonus provisions mentioned above, the 25 percent increase awarded by transferred development could be calculated in addition to the extra development granted by the density bonus.

The Golden Hill TDR program allowed the owners of historic properties within the Golden Hill District to transfer the difference between the floor area of the landmark and the floor area that would be permitted under the density limits of the zoning code. However, on many properties, the density allowed by code is not much greater than the density of the existing historic structures. And, in some cases, the existing buildings have a higher density than the current zoning allows. For example, in the historic-residential subarea, development is limited to 29 units per acre, a density that is often lower than the density of existing historic structures. Consequently, the owners of historic buildings often have little motivation to demolish landmarks. This imbalance tended to reduce interest in the Golden Hill TDR Program.

At the other end of the transfer process, the owners of potential receiving sites have relatively little incentive to buy additional density because they can typically achieve the density they want under the limitations imposed by the base zoning. For example, in five of the District’s eight subareas, the code permits a density of 43 units per acre.

In addition, the neighborhoods surrounding potential receiving sites typically resisted the idea of accepting additional development just so historic landmarks could be saved at some other location. Furthermore, projects which proposed to use transferred development rights often sought to use density bonus as well, creating proposed developments which neighborhoods considered to be overly dense.

In the early 1980s, two projects were approved which allowed the transfer of from five to ten residential units. After that, there was no transfer activity. According to Michael Stepner, San Diego City Architect, there was little public consensus regarding the goals of the Golden Hill TDR program. To generate more transfers, a plan amendment would be needed to create motivation for sending site owners to sell their development rights and for receiving site owners to acquire development rights. However, when the TDR program was first adopted, the City Council decided to allow higher densities to receiving sites without the need to acquire transferred development rights.

When the Golden Hill Planned District was updated in 1989, the TDR provisions were removed from the ordinance. In the late 1980s and early 1990s, the City of San Diego once again considered expanding its use of TDR City-wide to include the preservation of open space and sensitive environmental lands as well as historic properties. To define the concept, a draft TDR policy was prepared complete with proposed definitions, procedures, criteria and findings.

However, the City Planning Department cautioned that TDR can be problematic because the public facilities designed for a receiving area may not be adequate to accommodate transferred development. In addition, the report noted that San Diego’s own Golden Hill TDR program had experienced little use. Consequently, the staff recommended that the City not pursue a City-wide TDR program at that time.