San Francisco, California, population 874,671 (2019) has one of the most successful historic preservation TDR programs in the nation. This accomplishment largely stems from the observation of the factors common to programs that achieve good outcomes: receiving area baselines that developers want to exceed, sending area regulations that motivate property owners to participate, few ways to obtain bonus density other than TDR, and confidence in the ability to use TDR to gain additional floor area. 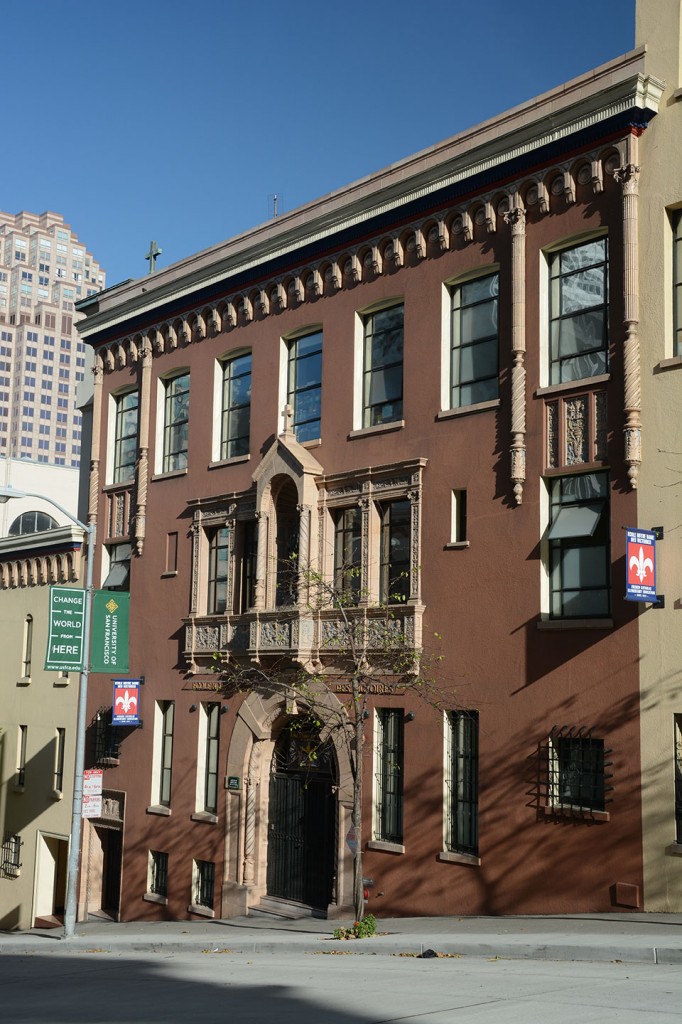 The San Francisco TDR program certified 112 landmarks as of 2011, including this historic building.

The TDR program here launched as part of San Francisco’s 1985 Downtown Plan which reduced the as-of-right FAR but allowed qualifying developments to exceed that lower baseline by transferring unused floor area from historic landmarks. Specifically, 253 structures were designated as architecturally significant and another 183 were deemed contributory. Unlike procedures used in some cities, these historic designations did not require the consent of the landmark owners.

Per Planning Code Sec. 1109, it is practically impossible to demolish a structure designated as a significant building (Category I and II), a limitation that motivates the owners of these properties to participate in the TDR program. There are fewer restrictions against demolishing contributory buildings (Category III or IV), but after the owners use the TDR process, the city prohibits demolition or alteration as with significant buildings. Buildings designated as individual landmarks can also become sending sites. Category V buildings that meet eligibility requirements can also participate in the TDR program. When these preservation lots are located in the C-3 zoning district, they are potential “transfer lots”, the city’s term for sending sites.

Parcels zoned P (public) can be transfer lots if they are owned by the City and County of San Francisco and located in a P district adjacent to the C-3 zone. Proceeds from the sale of TDRs from qualified sending sites in the P zone must be used to rehabilitate these public buildings.

The difference between the actual lot area on a transfer lot and the floor area allowed by the C-3 zoning is the TDR potential. When transfer lot owners choose to participate, TDR can be transferred on a one-to-one basis to “development lots”, the city’s term for receiving sites, at the ratio of one square of additional floor area per TDR.

The C-3 zone, which serves as the receiving area, has various subdistricts with different baseline densities. Baseline is 9 FAR in the C-3-O district and can double in intensity to FAR 18 using TDR. In contrast, baseline is FAR 6 in the C-3-R and C-3-G districts but can reach FAR 9 by using TDR, a 50 percent increase in intensity.

TDR only affects the allowed FAR on a development site and not other development standards including building height, bulk, setback, sunlight access, and separation between towers. However, the height limitations have not been reported to be a hindrance to the use of TDR in San Francisco.

TDR is conveyed by certificates of transfer prepared and recorded by the city’s zoning administrator. These certificates incorporate notices stating that the development potential of the transfer lot has been permanently reduced by the square feet of floor area transferred. Sending site owners can transfer all of their TDRs at one time or transfer portions of them incrementally. However, after the first TDR transfer, the owner must prepare and implement a restoration plan, which may include necessary seismic retrofitting for the landmark. The owners must spend some of the proceeds of TDR sales on restoration, but there is no minimum spending requirement and the city allows considerable flexibility in these plans (Frye 2017). Once TDRs have been transferred, a significant or contributory building cannot be demolished unless the city determines that the building has lost all reasonable use or is an imminent safety threat.

Transfer lot owners can transfer TDRs directly to the developers of receiving sites or to intermediaries. As of 2017, neither transfers nor the TDRs themselves were taxed, a feature that generated a great deal of intermediary participation in the past (Frye 2017). Because the TDR program has been stable and reliable for decades, the development community and real estate professionals have been able to find TDRs and negotiate a mutually agreeable price on their own. The city decided not to create a bank in order to avoid competing with private interests and otherwise interjecting a public component into a functioning private market.

TDR is the only way to exceed baseline FAR in the C-3 with the exception of affordable housing. This largely explains why this program has succeeded while TDR often languishes in places where developers can obtain bonus development potential by building on-site amenities like locker rooms and eco-roofs that yield additional floor area at a cheaper price than floor area transferred from offsite sending properties. However, the city has exempted at least one major project from TDR requirements: in 2006, the city approved a development agreement that waived the TDR requirement for the Trinity Plaza project, which otherwise would have been required to acquire 879,000 square feet of transferable floor area (Seifel 2013).

The application of TDR to a receiving site is allowed without discretionary approval. Even though other aspects of a development may still require public hearings, the ministerial nature of transferring FAR is also one of the reasons for the success of this program.

In 2013, San Francisco commissioned a study of its TDR program. At that time, 5.3 million square feet of TDR had been transferred, representing the preservation of 112 sending site landmarks. Another 2.3 million square feet had been certified at that time but not used and an additional 2.7 million square feet existed on sending sites that had not yet been certified. Despite an apparent abundance of supply, the consultant believed that many of these untapped TDRs were not readily available because they are in small amounts or constrained by ownership and transactional issues. For this reason, the report recommended certifying 1.2 million of the total 3.6 million square feet held in publicly-owned buildings such as the Opera House and Veterans Building. The report further recommended selling these public TDRs for a minimum price of $25 per TDR (subject to annual review) the market price of each square foot of transferred floor area in 2013 (Seifel 2013).

In 2018, San Francisco adopted Sec. 128.1 Transfer of Development Rights in the Central SoMa Special Use District. This code section aims to facilitate the economic viability of buildings of civic importance in the South of Market (SoMa) Special Use District. Sites with significant or contributory buildings in Central SoMa may become transfer lots for the purpose of transferring TDRs to development lots within the Central SoMa Special Use District. The TDRs available for transfer is calculated as the difference between the actual floor area of the landmark and its allowable gross floor area. This code section establishes allowable gross floor area for buildings in five height districts ranging from FAR 3 in height districts of 40 to 49 feet to a high of FAR 7.5 for projects in height districts over 85 feet. In addition to historic landmarks, buildings consisting completely of affordable housing units can qualify to become transfer lots in the Central SoMa TDR program.