The 15-block Southwest Washington DC Ecodistrict has key ingredients for a sustainable neighborhood: an enviable location between the National Mall and the waterfront; an existing Metro station; and major property owners, notably the US government, eager to do the right thing. But changes need to occur for the district to reach its full potential. For example, the area is not currently pedestrian-friendly due to physical obstructions, an office monoculture and lack of streetscape amenities. Fortunately, the National Capital Planning Commission committed to a major makeover by launching the SW Ecodistrict planning process in 2010. After three years of work, the final SW Ecodistrict, Plan: A Vision for a More Sustainable Future promises to create a model for joining prosperity with sustainability by integrating buildings, infrastructure and public space at the neighborhood scale. 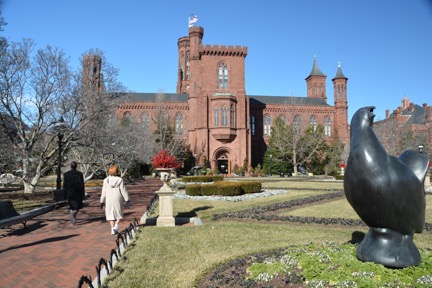 The iconic Smithsonian Institution Castle anchors the north end of Tenth Street, which will be transformed into a showcase for multi-modal mobility, storm water reuse and other ecocity features.

The plan aims to coordinate several initiates occurring here including the revitalization of the National Mall, a new master plan for the Smithsonian Institution, proposals for a private, multi-billion dollar waterfront project, an effort by the General Services Administration to use federal office space more efficiently and a desire from all governmental players to meet ambitious sustainability goals.

Over its 20-year horizon, the plan calls for new or improved parks and plazas as well as a retooling of street corridors, making this neighborhood a fitting destination for future museums, memorials and public venues comparable to those found on the adjacent National Mall. To create a diverse urban neighborhood, new development will contain residential, retail, cultural, educational and hotel activities as well as office space. The plan projects that mixed use development will increase 21 percent by 2030.

The plan calls for L’Enfant Station to expand is size and multi-modal capacity, becoming a hub of regional rail, Metro, streetcar and bus service. New development will be used to put some of the area’s supersized blocks on a diet, establishing a more fine-grained grid. Car-centric streets will be transformed to complete streets with sidewalks and bike lanes that encourage non-motorized transportation. In conjunction with neighborhood housing, these improvements will allow the daytime population of the ecodistrict to increase by 33 percent.

The SW Ecodistrict Plan calls for expansion of the existing L’ Enfant Metro Station, a key to creating a pedestrian-friendly, multi-modal neighborhood.

The existing federally-owned central utility plant will be refitted with the latest technology and expanded to serve private as well as public buildings throughout the district. Structural energy efficiency will result from building rehabilitation and redevelopment. Heat islands will be countered with green roofs, green walls, parks, swales and extensive street trees. Combined with the land use and transportation improvements, these efforts are expected to reduce energy use by 62 percent and carbon emissions by 75 percent.

The most visible transformation will occur on Tenth Street which extends from the iconic Smithsonian Institution Castle on the Capital Mall to Banneker Park overlooking the Washington Channel of the Potomac River. The streetscape here will be human scale and shaded by extensive landscaping, inviting people to walk or bike between destinations as well as just stroll. In addition, Tenth Street will showcase a commitment to sustainability. Pervious surfaces will capture all rainwater and store it in underground cisterns for reuse for non-potable purposes including irrigation of the areas parks and green streets. 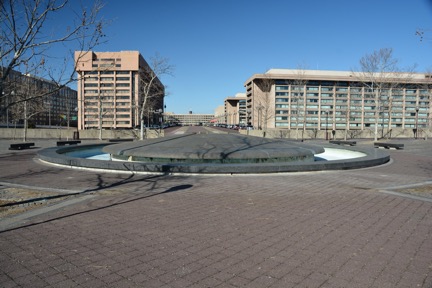 The Ecodistrict Plan identifies Banneker Park, at the south end of Tenth Street, as a potential site for a future monument or institution.